On 26th November, just a few short and busy weeks away, the doors of Limerick’s Belltable arts centre will once again reopen to new premises. The Belltable has been undergoing extensive renovation at its home at 69 on Limerick’s O’Connell Street for over the last year. Gillian Fenton, marketing manager with the Belltable arts centre, said they are looking forward to the grand re-opening:  “The new space on 69 O’Connell Street is going to be a lot bigger and more accessible. Our programme will be able to take advantage of that, so it’s going to be great. Like every building project, there were always going to be hiccups along the way. The doors will open on November 15, but we will be putting all our focus on the official opening night, which will be November 26th,”

At this time of renewal and excitement surrounding this new departure in arts and culture in Limerick, it is fitting to delve into the archives and look at the coverage of the opening of the original Belltable in Limerick in 1981. An incredibly innovative departure for its time, it placed Limerick firmly in the cultural heart of the Mid-West. The following article is from the Irish Times, dated 1 September 1981:

Belltable Takes Off – Since its opening five months ago Limerick’s Arts Centre has proved a resounding success and hopes soon to be self-supporting.

I’d never go up to Dublin for longer than a couple of shows added Brid Dukes, Artistic Director of Belltable arts centre, who is happily ensconced in the Belltable while audiences filed in for the evening show of I Do Not Like Thee Dr. Fell. The stone trimmed, coloured glass front with its big white lamps looks not unlike a particularly nicely kept Victorian police station, stuck into half of a Georgian mansion.

Belltable got its name as a compromise by those Limerick people who remembered its old days as a cinema and wanted it to be named in memoriam as the Coliseum and those who wished it to be named after the Confraternity C.U., whose building it still remains, or Amharclann na Feile, who ran it for years before them. Henry Hubert Belltable was a Belgian army officer who founded the Holy Confraternity in Limerick and whose aged portrait adorns a wall: but after that, he fades from the scene in a mass of modern looking, painted brick work and bright blue tip-up seating.

Newspaper coverage of Belltable's opening in 1981

After a while in the Belltable you can see what the irrepressible and bouncy Brid means. It is situated in O’Connell Street, near Limerick’s Crescent and for decades those streets seemed like tattered petticoats betraying the city’s formally grandiose merchant past: a past that had receded cruelly, leaving it high and dry. New developments seemed so crude beside them that you felt it was almost kinder to put the centre out of its misery. But people have helped tackle the restoration of the centre, now infinitely clearer and pleasanter than Dublin’s.

This type of thing is known as civic pride: and Brid points out that Limerick always had it, appointing itself an arts officer before any other city and being the fourth to open an arts centre with a theatre auditorium. So wipe that sneer off your urbane faces Brid would urge. “It was Paul Funge who earmarked the only possible building in Upper O’Connell Street, when he was Regional Arts Officer, and it was Paul who decided that Limerick’s biggest immediate need in the arts would be a medium sized venue to be open at least half the year and he pushed through the idea and financing”.

The latter question was taken care of by Shannonside Tourism, SFADCO, Limerick Council and the Regional Development Association, who coughed out £20,000 to replace tatty walls and peeling seats with low-key and elegant and practical fittings. The rent is £15 a week to the Confraternity, who live above the Belltable. And Brid is actually on the verge of getting the theatre to pay for itself….Brid has capacity houses for the first three months and aims to make the centre solvent and self supporting upon 30% houses with tickets from £1.50 to £3.00.

What do I want to do eventually here? Build, I suppose, a nucleus of actors and actresses to form our own company.” So far they have had the best of touring productions, starting with “Faith Healer” on 21 April for their opening night and running through the gamut if ITC and Druid productions. They intend to hold one act drama festivals in future” But on our non-subsidised budget, a company of our own is strictly in the future.”

Belltable’s  future is now once again secure in its proud new home and in a city that is as proud of its arts as it is of its other achievements.

Posted by Staged Reaction on October 21, 2010 in Uncategorized

Yet another busy week and here is a round-up of some goings on at home and abroad that came across the desk of Staged Reaction in the past week.

A cough or cold is usually enough to get you a glare of disapproval from your fellow audience members at a performance. However, when is it acceptable and actually welcome to fall asleep and snore at a play? London’s Barbican theatre is being transformed for a mass sleepover that includes the cast and audience. Lullaby is the brainchild of Duckie theatre company and the show’s producer Simon Casson. 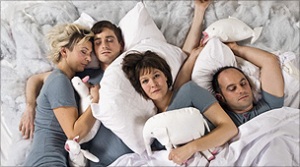 'Lullaby' at the Barbican theatre, London.

The audience are invited to stay the night at what is described as  ‘nod-off narrative’. Pillows are provided and the audience have a choice of single, double or triple size beds to bunk down in, for however much of the play they will stay awake for.

The production is dubbed “a moonlit soporific serenade followed by seven hours of slow-wave sleep rounded-off by breakfast to send you on your way”.

“Every time I go to the theatre I fall asleep, so I thought why don’t we embrace that idea and make a show that deliberately sends people to sleep?” added Casson. The production is dubbed “a moonlit soporific serenade followed by seven hours of slow-wave sleep rounded-off by breakfast to send you on your way”.

The play is to be ‘staged’ for a month at the Barbican theatre, London from June 2011.

Posted by Staged Reaction on October 11, 2010 in Culture, Theatre